Today I have been reading, and have sat transfixed on the sofa until I completed, The Angel’s Game (2009) by Carlos Ruiz Zafon. Translated by Lucia Graves. 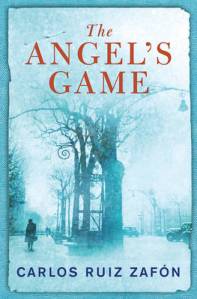 “In an abandoned mansion at the heart of Barcelona, a young man – David Martin – makes his living by writing sensationalist novels under a pseudonym. The survivor of a troubled childhood, he has taken refuge in the world of books, and spends his nights spinning baroque tales about the city’s underworld. But perhaps his dark imaginings are not as strange as they seem, for in a locked room deep within the house letters hinting at the mysterious death of the previous owner. Like a slow poison, the history of the place seeps into his bones as he struggles with an impossible love. Then David receives the offer of a lifetime: he is to write a book with the power to change hearts and minds. In return, he will receive a fortune, perhaps more. But as David begins the work, he realises that there is a connection between this haunting book and the shadows that surround his home.”

Gothic, mysterious, supernatural, uncanny- I could not put it down but having finished it just a few minutes ago, I’m still not sure what really happened! It made me want to go to Barcelona…

I have read The Shadow of the Wind by the same author some time ago, and while I remember enjoying it, I could not tell you the plot. I will have to re-read it now!

I have just seen on Wikipedia that there is a third novel in the series The Prisoner of Heaven (2012)  which finds David Martin into the 1940s where he is imprisoned and also revisits the characters from The Shadow of the Wind. I have already ordered this while I have been writing this post so I can read it while the characters are fresh in my memory.